skip to main | skip to sidebar

So I only go away for, like, two years and they go and change everything around here. Why can't things just stay the same and stuff?
at 3:45 PM 0 comments

I got an email from the University of Virginia Alumni Association this week, asking me to take a survey about my experience, almost 25 years ago now. I expected it to be fairly straightforward - rate your experience 1-10, tell me how useful your University degree was, that sort of thing.
But I was surprised. It was strange, and deep, and impressionistic. At least it seemed so to me.
One of the questions?
In four sentences or less, describe your favorite memory from the University of Virginia. Who was involved?
How do you answer that?
I thought a long time and remembered.
A endless Friday afternoon in front of the lawn room of my best friend Dave O'Brien. It was warm and beautiful. I don't remember the time of year, but in my mind it feels like May.
We had a little grill and some food, but no grill tools. I made a spatula by cutting up a beer can with a pair of scissors - and it worked. We grilled and drank and watched pretty girls go by. Our girlfriends came to see us. We chatted with friends as they walked by between classes. We laughed and talked about this and that, not a word of which I can remember today.
We were young and good looking and funny and the future was very far away.
How do they expect us to answer that?
at 12:06 AM 2 comments

Reasons why John Street may have switched to Independent

Former Philly Mayor John Street has mysteriously switched his party affiliation to Independent, despite the inherent disadvantages of doing so under Pennsylvania's wacky political system (including being unable to vote for his quirky brother Milton, who is running against Mayor Nutter in the Democratic primary on May 17). Why, we wonder. Why? Here are some possibilities:

1. Wants to challenge Mayor Nutter as an independent
2. Wanted polite excuse not to vote for Milton in the primary
3. Secretly afraid that Milton might win; worried he might have to save city himself
4. Mixed up forms; Independence Blue Cross wonders why he requested info on the "Democrat" health plan
5. Thought he was filing his Business Privilege Tax form; trying to tell city he is an independent contractor
6. Got really, really drunk in Old City; Also had sexy hula girl tattooed on butt.
7. Hoping federal investigators won't recognize him after the change
8. Mistakenly thought it would get him out of jury duty
9. Mad that Democrats are inviting that clown Gaddafi to run
10. To fuck with our heads
at 4:46 PM 1 comments

Colin's rendition of a Komodo Dragon, demonstrating that the best way to engage the environmentalist sensibility of an 8-year-old boy is to explain that the animal has a "poisonous tongue." 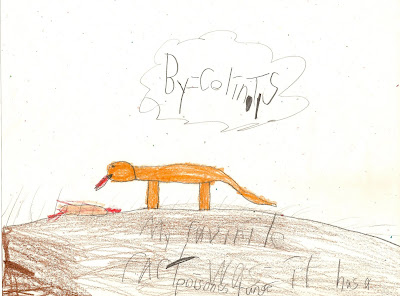 Things I think about, Part IV

1. Things that should be in Clue but are not:

2. Possible solutions in the new, more realistic version of Clue:

Dwayne with the chainsaw in the carport

Marsha with the sledgehammer behind the shed

Rhonda with uncle Jed's shotgun in the mobile home.

Jimmy at grandma's house while she's at Bible study with grandpa's Luger he got off some kraut Nazi bastard at Bastogne.

Carol with the ground glass in the hamburger in the breakfast nook.
at 2:23 PM 1 comments

XI. There are no more commandments.

XII. Seriously. I am done. Ten is more than enough.

XIII. Quit reading. Now you're annoying me, which is not good.

XIV. Because I am thy Lord and God. That's why.

XVI. Ok, ummm. Let not your body toucheth the pool or ocean until one hour hath passed after the last morsel shall have been eaten.

XVII. What do you want? I was in a hurry. These things take thought.

XVIII. I don't have time for this.

XIX. All right, I KNOW I technically do have the time for this, but I don't want to, OK?

As some of you know, I have been imprisoned in a full-time job for most of this year. For the first time in nearly a decade I have had to dress up and put on a tie almost every day.

And while I dislike wearing ties intensely, I do get to bring out my small collection of one of mankind's most under-rated inventions: tie clips.

See, as much as I hate ties, I happen to love tie clips. They are mindbogglingly useful - they keep your tie from blowing around, from dipping in your food, from getting all wet when you wash your hands. When you're wearing a suit, the tie clip can keep your tie fixed at exactly the perfect rakish angle.

And they look nice (at least I think so. "Very Spencer Tracy," observed one movie-obsessed friend once. I am not sure if it was an approving comment or not). I have gold ones. Silver ones. Inlaid ones. They're cool.

But wearing a tie clip has begun to make me sad in a sort of existential way. And that is because a tie, to which a tie clip is a nifty accessory, is in itself perhaps the most useless accessory ever invented by mankind. It serves no practical purpose at all and is only marginally attractive, so it serves a limited decorative purpose.

This has forced me to contemplate the place in the universe of the useful little tie clip - what does it mean to be the world's most useful addition to the world's least useful accessory ?
at 7:53 PM 2 comments

There's this game going around on Facebook - post the 15 albums that will "stay with you." The gimmick is to give yourself no more than 15 minutes and give your first reaction. Then you're supposed to tag 15 of your friends.

And I am just not going to do that 'cause I am a curmudgeon and I don't have to. It's in the Constitution, as I recall.

But the question is rather interesting. So I will post it on my Blog, which will automatically show up as a note on Facebook. But no tagging people.

And since it's my own damned blog and I can set the rules, I am adding some commentary too.


1. Abbey Road, Beatles - The first album I ever owned. The songwriting is gorgeous, the production is rich, and the engineering is nearly unbelievable given the era. Even as a 13 or 14 year old, I knew I was listening to something astounding.

2. Dark Side of the Moon, Pink Floyd - this is a headtrip that will never get old, with some of the finest engineering and arrangement ever. My favorite songs have shifted over the years, but this remains a favorite I cannot shake.

3. Kina, Kina - an honest, emotional, and powerful rock album by a former R&B girl group singer, Kina Kosper. I was riveted from the opening notes of the first song.

4. Stop Making Sense, Talking Heads - a live album that captures a great band at the peak of their power. The movie made me a lifetime fan.

5. Exit ... Stage Left, Rush - again, a live album that captures a band at their absolute pinnacle of power. Rush speaks best to 15 year old boys. And I was 15 when this came out.

6. Life's Rich Pageant, REM. - A great band hits its stride. It touched on folk, rock, and art rock in exactly the right proportions.

7. Autobahn, Kraftwerk - just blew my mind. I was just getting into electronic music in 1984 and I could not believe a bunch of square German boys had done it all 10 years earlier.

8. The Groobees, The Groobees - a super tight large country combo wrapped around the clever songwriting of Susan Gibson. I was hooked from the opening lyric: "Spent half a tank of gas on this conversation; still hasn't got us anywhere."

10. Almost Famous Soundtrack, various artists - a collection of classic 60s and 70s songs, none of which are my favorites, but which together speak to me about my youthful discovery of rock music.

11. Fly, The Dixie Chicks - some really clever songwriting and outstanding production make this mass market country at its finest. And it happens I was on a business trip in Austin when I was listening to it. Driving around the city at night listening to this was perfect in a way I cannot recreate.

12. Cabaret Movie Soundtrack, Various Artists - my parents loved this movie and played the soundtrack incessantly. I love it too. Joel Grey deserved his Oscar as the super-creepy emcee. The soundtrack is funny, sad, touching in turn.

13. The Cars, The Cars - It's like they were singing inside of my head. One of the finest headphones albums ever made.

14. I Often Dream of Trains, Robyn Hitchcock - it was like falling into a dream state to hear "Furry Green Atom Bowl" on the radio my first month of college. I went and got the album and was transported. I will never get tired of this album.

The Job I Never Had

In college, I took a job cleaning boilers in the university heating plant. The guy who hired me said I needed to wear steel-toed boots so my feet wouldn't get crushed by heavy equipment. He told me I needed to wear long sleeved shirts, even though it was about 110 degrees in the boiler, so if a steam pipe burst, it wouldn't burn my skin as badly. He told me he hoped I wasn't claustrophobic so I wouldn't panic in tight spaces.

I lost a lot of sleep about this job. So on the first day, I showed up early and sat on the front step and waited for my new boss. He arrived and I mumbled something about"I have to leave town." He looked at me intensely for a minute and I was sure he knew I was lying.

Then he smiled and shook his head knowingly and said "It' s about a girl, innit?"

I smiled as roguishly as I could manage and agreed with him. And took the hell off down the street.
at 7:27 AM 2 comments 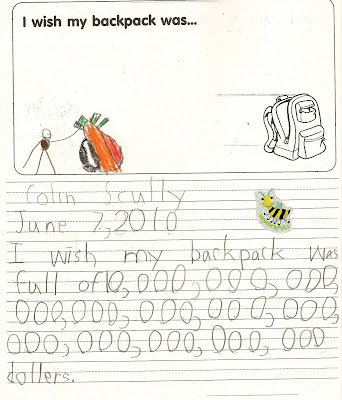 Sean Scully
I'm the editor of a small town newspaper and darned pleased to be there.